Nearly 200 eateries that would have participated in Hudson Valley Restaurant Week this past spring will be taking part in a ...

https://news.yahoo.com/restaurant-week-morphs-time-dine-030402697.html
Posted by Mount Vernon Roundup at 5:08 PM No comments:

Mother-son team have come up with creative ways, and some creative sweets, to survive a downturn in business due to COVID-19....

https://www.msn.com/en-us/foodanddrink/foodnews/mount-vernon-pastry-shop-delivers-creative-treats-old-fashioned-hospitality/ar-BB16rJoX
Posted by Mount Vernon Roundup at 5:05 PM No comments: 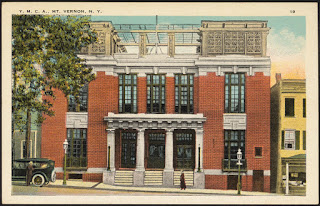 A developer plans to make the land where the YMCA sits part of a new development to transform the neighborhood in Mount Vernon.

https://www.msn.com/en-us/news/us/mount-vernon-mulls-new-offer-for-troubled-ymca-building/ar-BB16s3ar
Posted by Mount Vernon Roundup at 5:03 PM No comments: 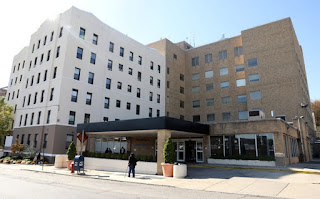 MOUNT VERNON, NY — Montefiore Mount Vernon Hospital officials have rescinded lay-offs for their Intensive Care Unit nurses after heated protests by community members and elected officials.
In a meeting Monday, Mayor Shawyn Patterson-Howard met with Montefiore Health Systems CEO Dr. Philip Ozuah. She was joined by local, county, state and federal elected representatives, and clergy.
"Dr. Ozuah noted that there are no plans to close Mount Vernon Hospital and that he’s willing to re-imagine healthcare within the city," the mayor wrote on Medium.com. "He also reiterated that he’s not tethered to the original plan to close the hospital, which was scheduled to close on June 30th, 2020."
Everyone in Mount Vernon was surprised when Montefiore Health System announced Oct. 15 that the hospital would be closed and a new emergency department and urgent care center would be built in the city instead.
https://news.yahoo.com/no-plans-close-mount-vernon-210708138.html
Posted by Mount Vernon Roundup at 4:54 PM No comments:

Four employees of the Mount Vernon Public Library have filed a lawsuit alleging sexual harassment by Oscar Davis Jr., the president of the library Board of Trustees.
Three of the plaintiffs are John Does who allege they were subjected to improper touching by Davis after he helped get them jobs at the library as teenagers.
The fourth plaintiff is Catherine Webb, a longtime employee who heads the library’s community outreach department. She claims Davis would call himself her “Daddy," proposition her and touch her inappropriately at the library and in his car when she accepted his offer of rides home or to work events.
Gary Newman, head of the reference department and the library workers’ CSEA union representative, called on Davis to resign from the board or be removed based on the allegations. Newman and other union officials have been critical of Davis' leadership in the past....

Posted by Mount Vernon Roundup at 4:49 PM No comments:

Mount Vernon police have arrested the man they believe fatally shot Kashawn Smith on April 28 but they remain mum on what led...

Posted by Mount Vernon Roundup at 4:44 PM No comments:

The critical readers of Mount Vernon Roundup know that when reading, viewing, or listening to any local "mainstream" news report or blog post, the main thing to realize is that truth and objectivity may be partialy obscured or totaly absent.

While local "mainstream" media outlets and blogs often self-righteously proclaimed that only the truth, the whole truth, and nothing but the truth, is published, the critical reader knows that local news reports in "mainstream" media have three primary purposes: (a) to entice their readers, (b) to be "politically correct" so as not to offend the powers that be, and (c) to lure advertisers by showing the number of docile readers the local publication draws.

Beyond these less than honorable motivations listed above, local "mainstream" reporters, editors and especially publishers are also prone to inject their own personal prejudices and biases, either consciously or unconsciously.

Many times the vocabulary employed by local "mainstream" journalists and editors is often pejorative and very value laden.

Actually, this is an argument in and of itself that there is a bias.It is up to the critical reader to point this out by means of blog posts and letters to the local "mainstream" newspaper editors and publishers..

There are honest and objective local "Mainstream" journalists, editors and publishers who try and produce a newsppaper that presents all sides of every issue.

However, these local journalists, editors and publishers who have succeed in resisting the pressures to be biased are few and far between.

Many times the critical reader will discover that these local "mainstream" journalists, editors and publishers cave in to pressures, and/or who are prejudiced and nonobjective by nature.

It is therefore up to the critical reader to carefully evaluate and then reject or accept the claims and assertions that are made in any given news story or blog post.

Local "mainstream" journalists, editors and publishers need to make sure they produce well-researched articles that are based on objective description of empirical facts.

One of the goals of Mount Vernon Roundup is to help these local "Mainstream" journalists, editors and publishers need to strive to convey reality and contribute to enlightenment of Mount Vernon.

However, the critical reader must understand that journalism which abandons these criteria can be misleading and destructive, pandering to the powers that be rather than courageously and honorably serving truth and justice

Mount Vernon Roundup publishes email addresses for reporters, editors, and publishers when such addresses are publicly made available.

We encourage our reader to send intelligent, civil, and reasonable emails to these journalists, editors and publishers.

However, a critical reader who sends some correspondence to an email address obtained from this website is, in one sense, representing this blog.

What the writer says, and how it is said, reflects directly on Mount Vernon in general and on this site in particular.

Local "mainstream" reporters, editors and publishers are interested in deadlines and getting stories written that people will read.

If a critical reader can help them do that, then their contributions will be greatly appreciated.

Remember, good stories are factual and well organized, but they also communicate something of the human spirit.

Likewise, letters to local "mainstream" reporters, editors and publishers, while based on heartfelt convictions, also should be well organized, with points and logic developed in a rational sequence.

Brevity and conciseness are very important, and a long-winded rambling discourse is not likely to be given serious consideration.

For that matter, a "letter" does not even have to be a letter, a single sentence can get a point across.

Nor does a letter have to be for publication or even come from a verifiable source, all it needs to do is provide valid food for thought.

More and more local "mainstream" media-sponsored web sites are providing submission forms or links where anyone and everyone can post "comments" on their stories.

Some sites also provide various forums of one type or another.However, these forums may require registration.

Many of the comments, suggestions, and cautions that we have provided the critical reader about the submission of comments are very applicable to participation in these forums.

There are no established "standards" for the submission of these comments, and it is necessary and important to very carefully read the instructions, requirements, and limitations for submitting your comments.

Some local "mainstream" newspaper or blog sites may ask for a name, but these are not checked, so there is no need to use your real name if you do not want to.

Other local "mainstream" newspaper or blog sites may allow only a first name, some may permit the inclusions of URL references, links, HTML code, and email addresses, whereas others may not.

When submitting such comments, it is important to "take the high road."Personal attacks, hatefulness, rash accusations, snide insinuations, misleading assertions, and outright lies are the stock in trade of many posters, but the most effective way to disarm and dismiss these posts is to rise far above such tactics.

Name-calling, abrasiveness, unsupported and insupportable assertions, and otherwise descending to the level of negative posters' inanities not only undermines one's credibility, but reduces the likelihood that one's comments will be accepted and printed.

Submissions should be brief and concise.

Two or three short paragraphs is about all that the average reader will assimilate .

Be polite, but factual.

Try to deal with reality, and not with far out ideas or wishful thinking.

Take your own concept or idea and address it as thoughtfully, professionally, and concisely as possible.

But first read the existing comments and make sure you are not repeating what someone else has already posted.

Mount Vernon Roundup is a website that encourages fair, accurate, and complete media reports and blog posts about the people and events in and around Mount Vernon.

If you would like to be one of Mount Vernon's newest ethical journalists that is willing to report the complete truth about the diversity and magnitude of the human experience in our city, then please submit your news story to....

Or if you have a blog about Mount Vernon, then submit links to your blog posts to.....

Or if you have a news tip or story idea, then submit these items to....

Or if you notice news or blog links concerning Mount Vernon, then send them to......

Please include contact information with the items you submit to us.

You will not be contacted unless your submission has a problem or is unusable.

Online news, multimedia, blogs and complete digest of the events and issues that effect the people of Mount Vernon.

Our goal is to promote critical reading and evaluation of news and blog postings. We strongly encourage our readers to send feedback to reporters, webmasters and to write letters to the editor.

We also hope that visitors to Mount Vernon Roundup wiil express thier views by commenting on blog postings here and at those provided by linked news and blog sites.